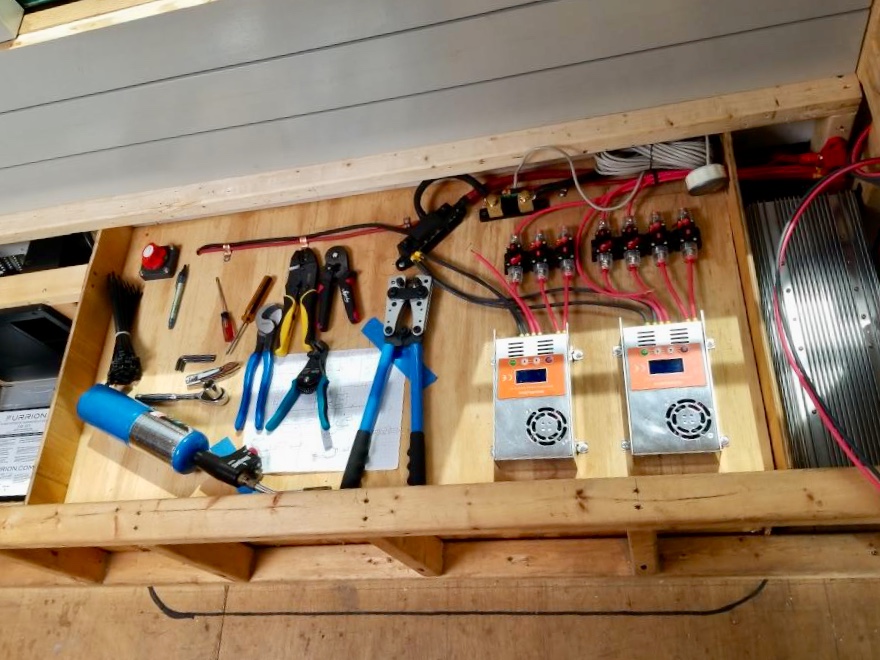 In the past four weeks, since our last post there have been lots of installations happening on the bus. One of the biggest is the solar panels! Getting the whole solar set up completed has happened in stages. With the batteries in place under the bus, the next step was to get the charge controllers, inverter and battery monitor in place underneath the couch. The picture below shows the control center of the solar system, that has wires running underneath the bus to the batteries and wires running up to the roof for the panels.

Another exciting installation that happened is the indoor unit of our air conditioner is in place. The unit was actually installed before the solar panels so we have used it several times with shore power.

In anticipation of some suspension work being done on the bus, we hooked up the refrigerator this past week. It was a TIGHT fit getting that thing into place but it worked out! And even more exciting, is that it’s been running off of solar ever since!

Other little updates happening around the bus:

We have one major wall to finish, the floor and toilet to install, the propane lines to run, cabinet doors to make and a handful of other items to finish on the bus. It’s getting so close!

Skoolie Share: This is another bus build that we haven’t seen in person but they have given the bus a unique look and spin for their own functionality: