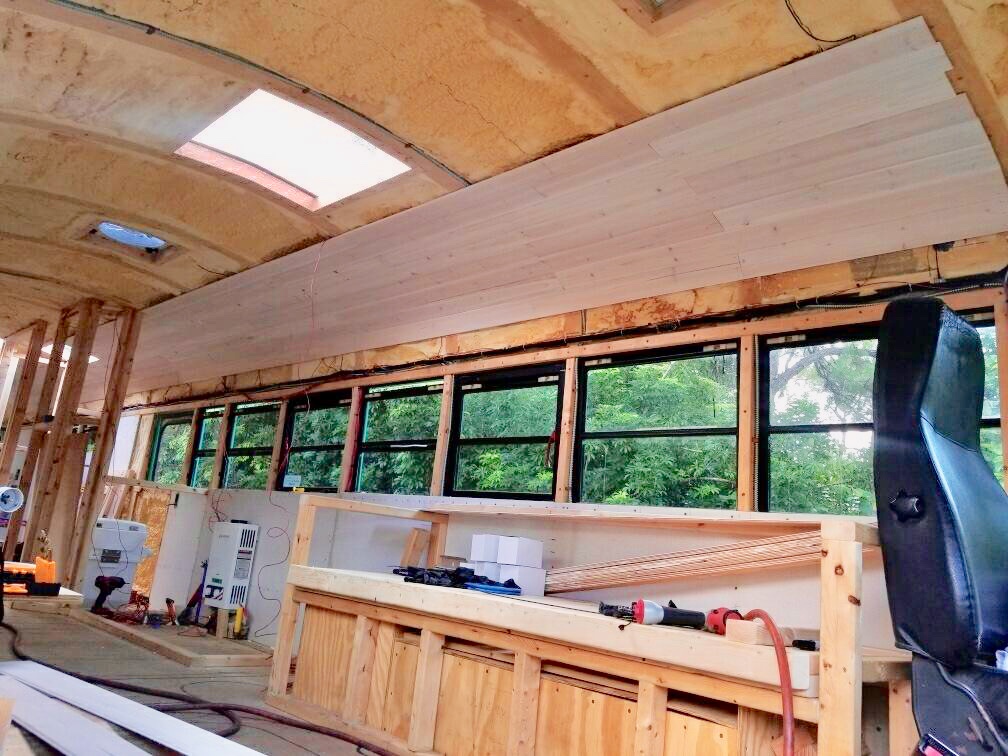 It all started when we decided to work on installing our shower.

We quickly found out that to get accurate measurements and cuts for the shower walls, we would need to have the ceiling panels up. So we switched gears.

We decided to go with tongue and groove cedar planks for the ceiling, which we purchased several months ago. Since that time, Audrey has been sanding and whitewashing the boards to get the look we’re wanting in the bus.

We started installing the panels at the back of the bus, working from drivers to passenger side. For that first ‘row’ of boards we alternated the lengths to give the ceiling a staggered look throughout and avoid having several obvious seams where the boards start/end.

The boards are nailed into the furring strips we installed months ago before the insulation went in. For a lot of the installation, we were able to get into a pretty good rhythm; especially after that first section in the back. Once that initial portion was completed we started installing the panels from back to front (instead of side to side). That made things a lot easier.

As we progressed along we would drill holes for the ceiling lights, pulling the wires through that had previously been run. Back when we ran the wires and planned out where lights would go, we forgot to mark one end of the wires. So we marked all the wires on the end that connects to the breaker panel; it was the other end of the wires- that would connect to the light or switch that was unmarked.

This slowed us down just a little as we had to spend time identifying which wire was which. But we’re happy to report that all the lights that have been installed AND light up!

We stopped the cedar about 6in above the windows so we could install bigger/heavier planks of wood that will serve as wire chases. These planks will be removable so if work ever needs to be done on the electrical, we will be able to access the wires.

We have not installed the wire chases for the passenger side of the bus. We will do that around putting up walls. We also need to get wood plugs to cover the screw holes in the boards.

Here’s a video of the process. Hope you enjoy!

In other bus news, Paul put new headlights on the bus. The ones the bus came with were old and had the strength of birthday candles; typically requiring us to use the brights when we drive the bus at night. Which is typically when we take the bus out driving to keep everything greased up.

Skoolie Share: This couple we had the opportunity to meet at a tiny home festival last winter in FL. They were super friendly and have very light and open feel about their bus:

4 thoughts on “Installing the Ceiling Panels”